The market for lithium-ion batteries (LiBs) is expected to grow rapidly due to their use in a wide range of applications, such as smartphones, drones, and electric vehicles (EVs).
In the automotive market, emissions regulations are being tightened in major countries, as exemplified by Euro 7 in Europe, the Zero-Emissions Vehicle (ZEV) regulations being strengthened in California, and China moving toward the New Energy Vehicle (NEV) regulations. It is becoming difficult for conventional engine technologies based on use of fossil fuels to comply with these regulations. For this reason, automakers are beginning to shift their focus toward popularizing EVs and plug-in hybrid (PHV or PHEV) vehicles1).

According to a survey by a think tank, more than 60 million EVs and PHVs are expected to be sold globally in 20402), and the demand for battery capacity is also expected to surge. Consequently, there is a pressing need to enhance production facilities and develop large-capacity batteries, with battery makers competing furiously toward commercialization of the technology.

＊This article appeared in the September 2019 issue of the technical journal No. 83.

An LiB has a structure in which a cathode, an anode, and a separator are stacked and immersed in an electrolyte, as shown in Figure 1. As mentioned above, development efforts related to the materials and manufacturing methods of the various components are underway to increase battery capacity. Currently, a graphite-coated film is used for the anode, with a theoretical energy density of 370 mAh/g.
Replacing this graphite anode with a material that has greater energy density would increase battery capacity3). In particular, it is considered ideal to switch to an Li metal anode with a theoretical energy density of 3860 mAh/g, which is gaining attention as a likely next-generation anode.LiB 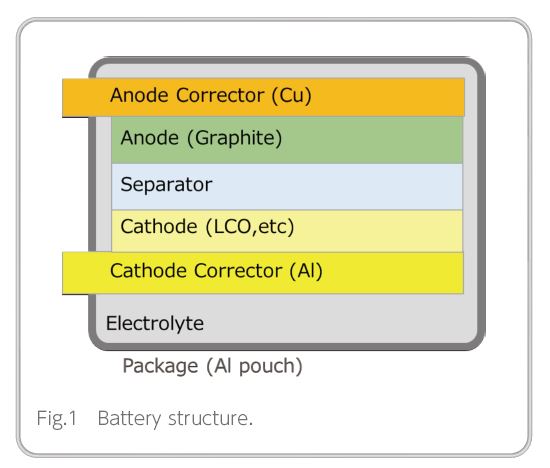 Although Li metal is ideal for increasing capacity, it has issues in terms of safety and service life. These issues are presumed to be caused by dendrites, which are needleshaped precipitations of Li metal that occur over the life of repeated charging/discharging cycles4).  As these dendrites grow, they cause short circuiting between the cathode and the anode, potentially causing a fire, etc. Additionally, as shown in Figure 2, Li that does not enable charging/ discharging occurs, called “dead Li” because it falls off during the growth stage, posing an issue in terms of battery life5). It is said that dendrites are caused by the current concentration that occurs on the anode during charging6), and it is considered that flattening the Li surface and forming a uniform passivation film at the same time could improve the current distribution, thereby suppressing the formation of dendrites. 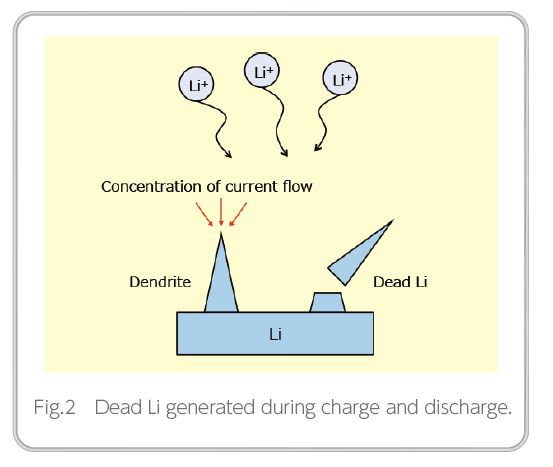 You can download full article with your registration
https://www.ulvac.co.jp/r_d/technical_journal/tj83j/