An electric double-layer capacitor (EDLC) is a highoutput capacitor with a long service life, but with the drawback of low energy density. Because policies for reducing greenhouse gas emissions have been implemented in recent years, there is a need to increase the energy density of the capacitors installed in hybrid electric and all-electric vehicles (HEVs and EVs).

An electric double-layer capacitor (EDLC) is a highoutput capacitor with a long service life, but with the drawback of low energy density. Because policies for reducing greenhouse gas emissions have been implemented in recent years, there is a need to increase the energy density of the capacitors installed in hybrid electric and all-electric vehicles (HEVs and EVs). For this reason, companies have been actively developing lithium-ion capacitors (LICs)1, 2). In an LIC, the anode of an EDLC using activated carbon for the cathode, such as the one shown in Figure 1, is replaced with a material that can be doped with lithium ions, thus improving energy density. 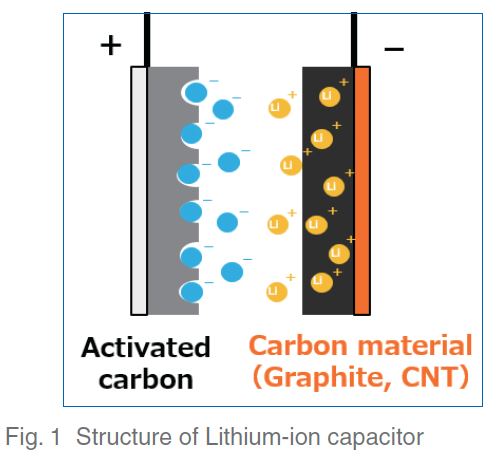 Figure 2 shows a Ragone plot of various types of energystorage devices3). A Ragone plot shows on the horizontal axis the power density (equivalent to instantaneous power) and on the vertical axis the energy density (equivalent to sustaining power). Because the ideal for a device is that it is positioned in the upper right-hand corner of the Ragone plot, it can be seen that LICs have the potential to become an ideal energy-storage device with both the instantaneous power of an EDLC and the sustaining power of a lithiumion battery (LIB). 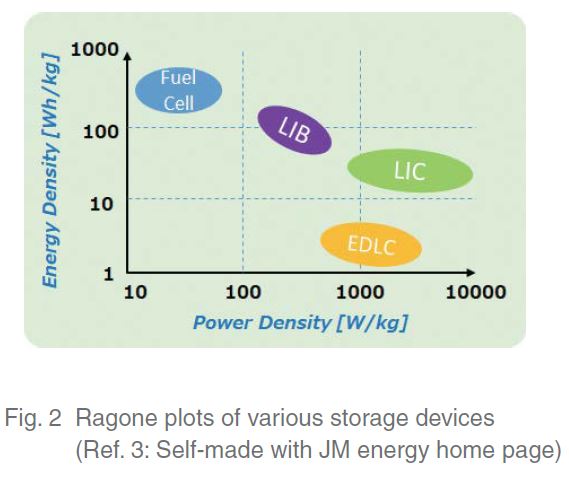 Because of their characteristic high-power, EDLCs are already being used widely in applications such as regenerative energy systems in cars, as well as in streetcars and fixed-route buses in China4). The capability to charge EDLCs instantaneously with a large current enables them to power a vehicle to travel the predetermined distance to the next bus stop or station. Replacing these capacitors with LICs reduces the size and weight of the large number of EDLCs installed, which also extends the cruising distance.

In the future, as rapid charging/discharging becomes possible and wireless power supply technology becomes widely available even on ordinary roads, EVs relying on LICs alone could also become a reality.

Underpinning the initiation of our LIC evaluation is the fact that we had been developing a carbon nanotube (CNT) electrode fabricated using a chemical vapor deposition (CVD) method for the cathode of a next-generation battery, called a lithium-sulfur battery (LiS). One of the issues to be resolved in order to use such batteries is the need for a large volume of conductive material, because sulfur is an insulating material. Use of CNTs, which have higher conductivity than carbon materials such as acetylene black, can reduce the ratio of conductive material, which will lead to improved battery characteristics. We have so far confirmed that because CNTs fabricated using a thermal CVD method are aligned vertically on the nickel metal foil, forming a superior electron conduction path even to the top area of the electrode (see Figure 3), the sulfur filling volume can be reduced dramatically5). This paper describes the verification results from our investigation into whether such a vertically aligned CNT electrode characterized by superior conductivity can be used as the anode material of LICs.

＊This article appeared in the September 2019 issue of the technical journal No. 83.

You can download full article with your registration
https://www.ulvac.co.jp/r_d/technical_journal/tj83j/