This post is also available in: Japanese Chinese (Simplified)

With a more than 90% share of the market for cryopumps in the flat panel display (FPD) field, ULVAC CRYOGENICS INCORPORATED (UCI) has—since its foundation in 1981—established itself as the leading player in the Asian cryopump market and continues to this day to provide support for the industry. Recently, though, UCI has begun proactively developing potential core businesses for the future by, for example, entering the cryocooler business in 2009 and took over the manufacturing and selling of cryogenic equipment from the Cryogenic Equipment Department of the Engineering Division at Iwatani Industrial Gases Corpration in 2014. In this issue’s “Visiting ULVAC”, we interviewed Mr. Masahiko Ishiguro, president of UCI, about the company’s current position and his vision for the future.

Founded in 1981 as a joint venture company based on joint investment and technical agreements between ULVAC (then ULVAC Japan, Ltd.) and the US company BROOKS AUTOMATION INC. (then the CTI Division of Helix Technology Corporation), UCI started out by renting office space in ULVAC’s head office in Chigasaki City. Four years later in 1985, UCI realized a long-cherished dream when construction of its Chigasaki Head Office/Plant was completed in what is now Yabata, Chigasaki City, allowing the company to further expand its operations.
UCI has amassed more than 30 years’ experience in selling semiconductor production equipment for LSIs; FPD production equipment for smartphones, PCs, LCD televisions and other such devices; optical film production equipment for glasses and digital cameras; and cryopumps for use in vacuum equipment such as a space chamber, which simulates the conditions of outer space.
UCI has been able to capture more than 90% of the FPD market in Asia thanks to the outstanding exhaust performance and low vibration of its products. Another of UCI’s areas of strength is its range of large cryopumps with a length of 16 inches or more. UCI has a more than 90% share of this market, too.
UCI went on to found ULVAC CRYOGENICS KOREA INCORPORATED (UCK) in 2004, and stayed ahead of the competition by founding ULVAC CRYOGENICS (NINGBO) INCORPORATED (UCN) in 2005. Being the first company to establish sales channels and a service network for this line of business in China helped UCI to gain customers’ trust.
As of June 2014, UCI had 79 employees working for it and the consolidated net sales for the ULVAC CRYOGENICS Group amounted to 4.5 billion yen.

In 2009, UCI entered into the business of cryocoolers used in the fields of superconductivity, medical equipment, measuring instrument, and laboratory cryostat by leveraging its cryogenic technology, a core technology platform for the manufacture of cryopumps.
In 2014, UCI began selling cryogenic equipment, after UCI took over the manufacturing and selling of cryogenic equipment from Cryogenic Equipment Department of Engineering Division from Iwatani Industrial Gases Corporation.
The technologies used by Iwatani Industrial Gases to manufacture its cryogenic equipment were highly regarded, particularly those found in the cryogenic chillers (cryostats) and refrigerators used for research and development. The synergy between these technologies and conventional cryopump technologies has allowed UCI to proactively pursue even greater technological innovation. Going forward, these technologies are expected to help UCI enter new markets, including the rapidly growing field of high-temperature superconductors and the medical field. (For further details, refer to page 21 of ULVAC News.) 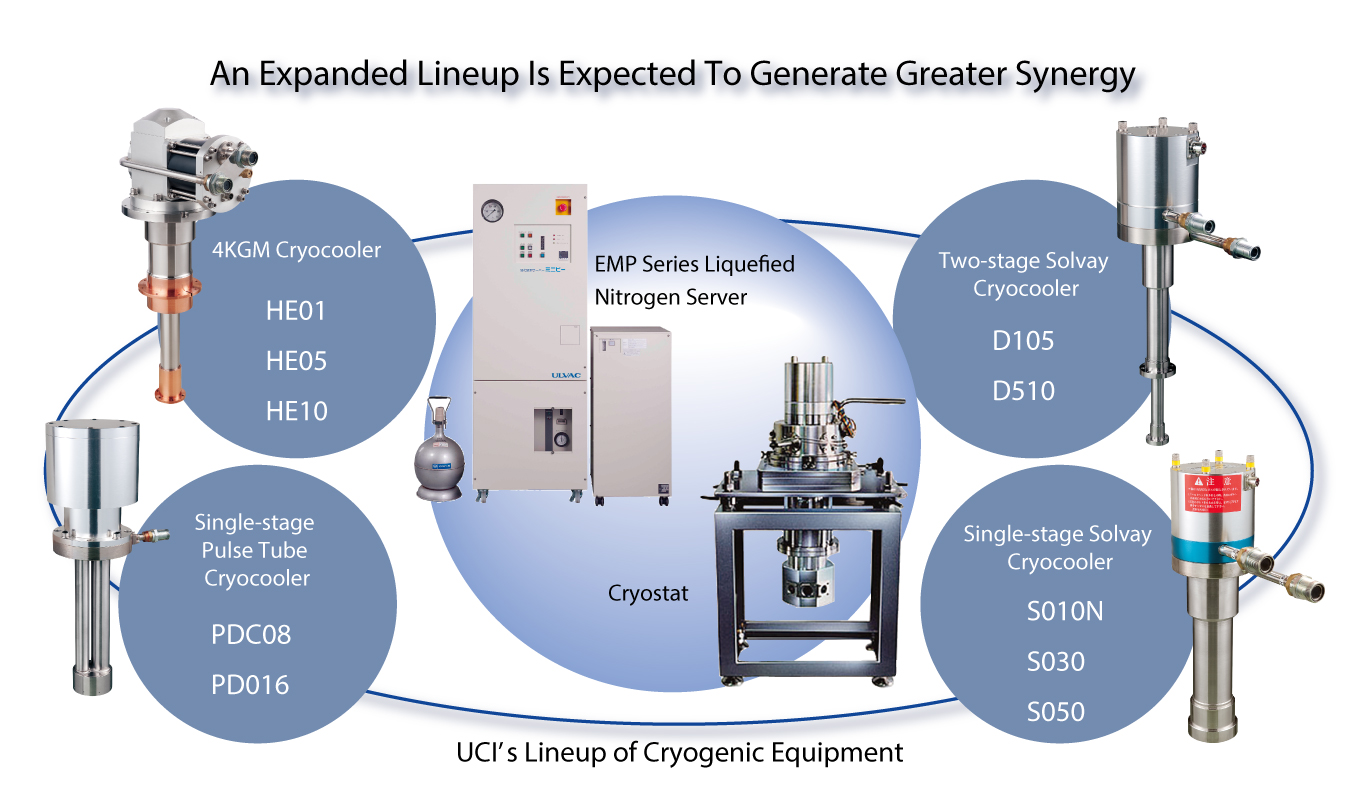 Based on its “Salespersons Wearing Work Uniforms” Strategy, UCI’s Unique Sales System Allows Client Requests to be Dealt with Quickly

UCI has a unique overseas sales strategy.
UCI does not have an independent department dedicated to overseas sales. Instead, such work is handled by the company’s Service Technology Department, which is also responsible for quickly dealing with customer requests and consistently providing services from delivery and repairs through to maintenance.
President Ishiguro, UCI’s president, refers to employees in the Service Technology Department that are responsible for overseas sales as “salespersons wearing work uniforms.”
Another of UCI’s distinctive features is its standardization of machine tools between Korea, China, and Japan. This allows the company to deliver the same level of quality in all three countries. UCI also provides its engineers in these three countries with rigorous training so that they can exchange personnel to meet workload requirements.

UCI has hosted annual barbecues at its plant over the last few years, and these events have been attended by all of its employees.
The company makes an effort to host such events in order to facilitate smoother communication between its employees and create a “family feel” in the workplace. Mr. Ishiguro says that they are close to realizing this goal because, having participated in a number of events now, almost all of the employees and their family members have gotten to know each other.
UCI is also proactive in interacting with other companies in the ULVAC Group. It has, for example, rented a fishing boat with ULVAC TECHNO, Ltd. (which is also headquartered in Chigasaki City) to hold a fishing event.

Having positioned Asia, which is currently undergoing dramatic industrial development, as its priority region, UCI is working to realize even greater service integration through cooperation with ULVAC KOREA, Ltd. and UCK in Korea together with ULVAC (Shanghai) Trading Co., Ltd. and UCN in China.
UCI’s efforts are particularly focused on increasing sales of cryopumps—one of their core businesses—over the next five years in the semiconductor market and the market for organic electroluminescence (EL) products, an area that has received a lot of attention in recent years. To establish its cryogenic device business as another of its core businesses, the entire UCI group is also committed to further developing its range of cryogenic equipment with a view to boosting sales of these products to the same level as those of cryopumps.