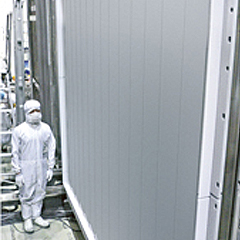 ULVAC manufactures and sells IGZO targets, which are used in IGZO TAOS (transparent amorphous oxide semiconductors in which In, Ga, Zn, and O are used). ULVAC is working to increase the density of the target and reduce the number of partitions to restrict particles while delivering total packages, including high quality IGZO targets, sputtering systems, and processes for IGZO to most display manufacturers around the world. ULVAC also succeeded in developing a large IGZO target, which is about three meters long. This large IGZO target is expected to provide a fundamental solution to the degradation of TFT properties.